We will shortly be uploading information on our ‘Trees and Woodlands’ full day seminar, hosted in collaboration with Coed Cadw/Woodland Trust in Wales on 10th November 2019. 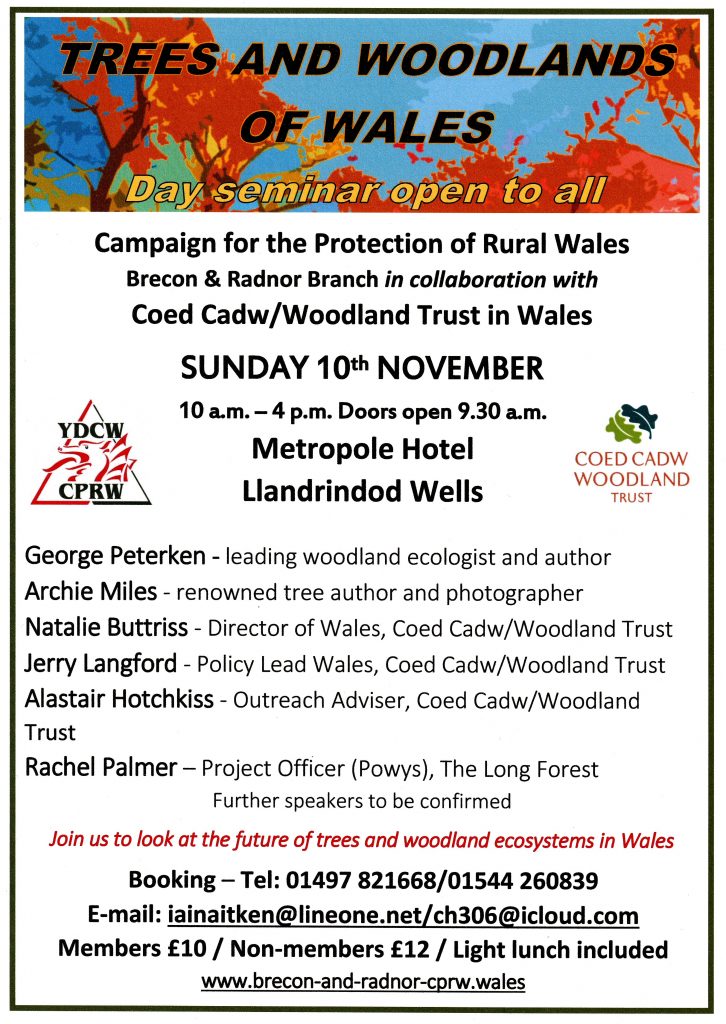 Visits and Vistas for Special Weekend

A lively group of members and guests from the Brecon and Radnor Branch of CPRW (Campaign for the Protection of Rural Wales) enjoyed a successful summer weekend of events with a programme of talks and walks, visits and vistas. The weekend started on Saturday afternoon 27th July with a special tour of Upper Dolley House, Dolley Green near Presteigne winner of the 2018 Louis Hurley Award for Architecture as a fine restoration of a late mediaeval Welsh Marches farmstead. Owners John and Diana Trew hosted the afternoon and John led the group tour giving an indepth talk about the origins of the building and some history of the people who had resided there over previous centuries. The visit concluded with a delicious tea served in the beautiful oak beamed and panelled parlour room.

Offa’s Dyke Centre in Knighton, currently celebrating its 50th birthday, was the Sunday afternoon location for an inspiring illustrated talk by local author Tom Davies who gave a moving account of his 1,100 mile fund-raising walk for the Altzheimer Society in 2016. The walk took him along the entire length of Offa’s Dyke Path and the Welsh Coastal Path. Following an interesting Q.& A. session, Tom signed copies of his book, ’A Welsh Wander – an epic trek right around Wales’. Everyone enjoyed tea at the Centre, before setting off with Tom and his family to enjoy a short ramble along a stretch of Offa’s Dyke on Llanfair Hill. Tom shared more stories as the group of walkers enjoyed the beautiful vistas across the unique Marches landscape, with the rolling hills of Shropshire to the east of the Dyke and out to the west, the distant hills of Radnor Forest and Beacon Hill.

Magnificent Meadows
Members and friends from the Brecon and Radnor Branch of the Campaign for the Protection of Rural Wales enjoyed a Sunday afternoon visit to the Elan Valley on 30th June to experience the beauty and importance of traditional hay meadows in the farming landscape. Hosted by conservationist, photographer and farmer’s wife, Sorcha Lewis of Troedrhiwdrian Farm, the group was given a fascinating introduction to the history and cultural context of farming in the valley, which is owned and managed by The Elan Valley Trust and Dwr Cymru.

The group was then taken on a sight-seeing tour of the extensive hay meadow area which continued down to the waters of Pen y Garreg reservoir. As well as a rich and abundant mix of wild flowers and grasses including field pansies, eyebright, betony, tormentil, harebells and woodland bitter vetchling, the area also contained a variety of orchids including the rare and beautiful lesser butterfly orchid and the wild globe flower. It was interesting to notice the subtle changes within the different plant communities depending on variations in location and soil conditions. The group was also interested to be shown the small round holes found in the trunk of an Iberian white birch tree (Betula Celtiberia). This was evidence of another rarity, the Welsh clearwing moth which emerges from the hole in June or July. The hole is drilled by the caterpillar which resides hidden there for two to three years before making its dramatic appearance.

This year National Meadows Day is celebrated on Saturday 6th July, when across the country the rescue and creation of wildflower rich hay meadows is celebrated with a variety of visits and events.

DOWN to EARTH with Brecon and Radnor CPRW

Yes, the answer does lie in the soil and on Saturday 3rd November (2018) in Talgarth, the Town Hall was full of delegates taking the opportunity to participate in the Down to Earth Soil Conference, organised by Brecon and Radnor branch CPRW. Attendees were able to listen and to share questions and answers with a pre-eminent panel of speakers, chaired by Dr. John Scullion from the highly respected Institute of Biological, Environmental and Rural Sciences (IBER) at Aberystwyth University. Dr. Scullion was joined by Dr. William Stiles also from Aberystwyth University, working with the Welsh Government’s Farming Connect Scheme. Other panellists included Dr. Alan Feest, an expert on biodiversity and fungi, from Bristol University, Ian Rappel, from Gwent Wildlife Trust, James Cooke a Welsh Government Agricultural Land Use Manager, Rory Francis from the Woodland Trust Cymru, together with two well-known farmers, Nuffield Farm Scholars, Richard Tudor and Geraint Powell.

The Soil Symposium Day was much enjoyed and well received by delegates and speakers alike. The invited panel who presented diverse and wide ranging perspectives on the topic, commented afterwards, how pleased they were to find such a keen level of interest expressed by those attending.

Soil is a precious and non-renewable resource, and today, more than ever we need to do all we can to find out about soil ecology. Only about twenty five per cent of worm species, six per cent of fungi and less than two per cent of soil bacteria have been studied and categorized. As we look to face up to the challenges of the 21st century, we all need to know how to safeguard the future sustainability of our soils.

On May 13th CPRW Brecon & Radnor Branch enjoyed a perfect spring day for their special celebration Garden Party at Broadheath House outside Presteigne, to mark the 90th Anniversary of the founding of the charity in 1928. 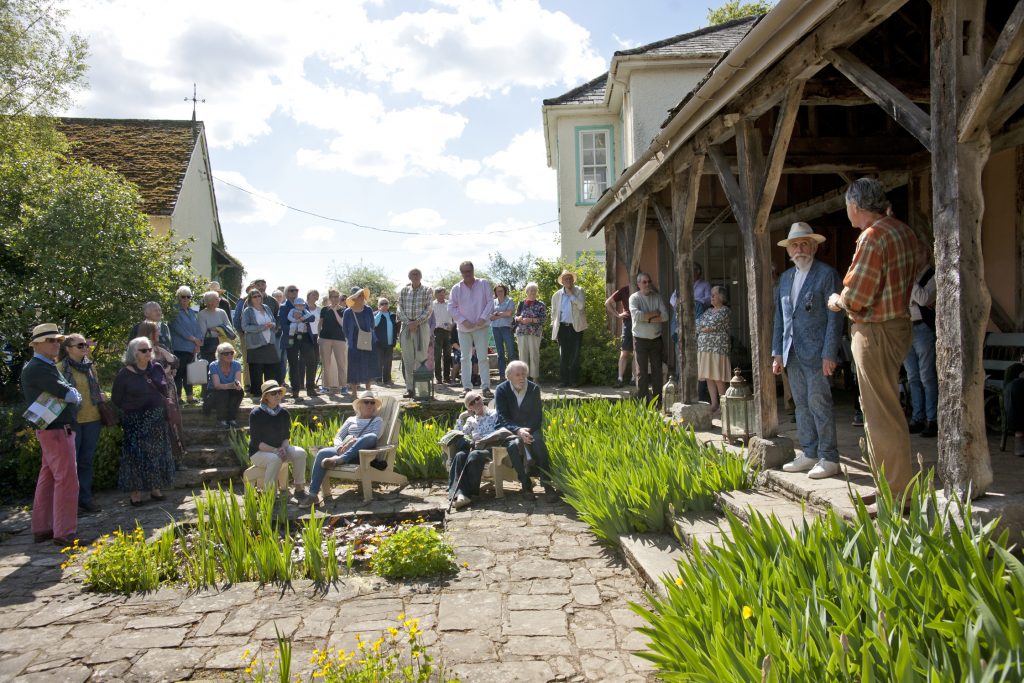 As the sun shone, more than 120 guests experienced the quiet ambience of the Italianate garden designed by the iconic Welsh architect Clough Williams Ellis, who also chaired the organisation in its early days. Special guest Sir Roy Strong opened the afternoon event with an insightful address to visitors who had come from across Mid-Wales and the Marches. He highlighted the changing times and the enduring values of the CPRW, including the importance of landscapes and the environment together with the necessity of passing on our heritage and culture for the benefit of the generations to come.

A delicious birthday tea was served on the Loggia followed by a traditional champagne toast given by the CPRW chairman Peter Alexander-Fitzgerald, who endorsed Sir Roy’s sentiments in a toast that commended the continued future success of CPRW.

The Future of Our Hills – Powys Uplands, Policy and Brexit

The Powys uplands have been shaped by traditional upland farming. Our hills are the backdrop to life in rural Powys and a magnet for walkers, riders and others. As well as being the upland farmers’ livelihood, they play a critical environmental role.

On Saturday 21st October 2017 at the Knighton Hotel in Knighton CPRW Brecon & Radnor Branch held a seminar to discuss the challenges and opportunities facing our upland areas. 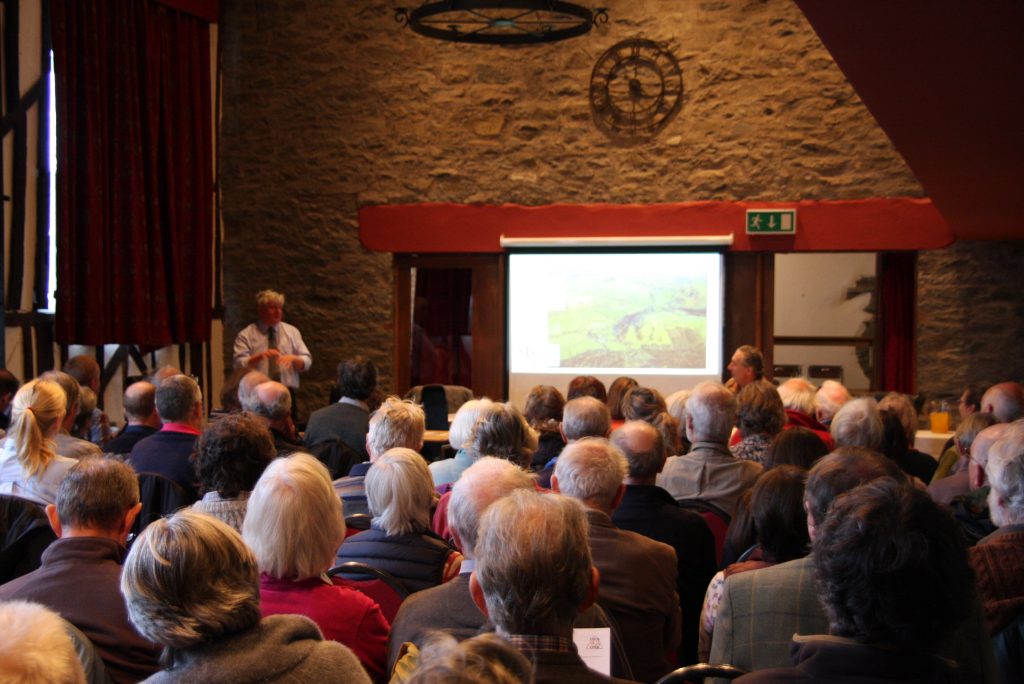 The presentations from our speakers looked at the history and the human geography of the Powys uplands, as well as current farming, land management and evironmental issues, and potential schemes for environmental service payments.

Ponds, Rivers and Poultry
(A report of the seminar can be found here)
An Open meeting to discuss the impact of intensive poultry production in Powys on our freshwater ecosystems:
Saturday 29th October 2016 10.00 am to 3.30 pm at Llanigon Village Hall, near Hay on Wye.

The morning included presentations and discussion of evidence and after lunch a discussion on how can the public help to protect freshwater habitats.

At Talgarth TownHall, on 4th November 2016, Rob Yorke, independent rural commentator, gave a presentation on ‘rewilding’. The presentation was stimulating, and sometimes provocative, and was followed by a good debate amongst the sizable audience on future land use and environmental issues.

Annual General Meeting 2016
(A report of the awards presentation can be found here)
Following the presentation of the Louis Hurley Awards, our Annual General meeting took place on 14th September in the River Café, Glasbury, next door to the converted Baptist Chapel, now the Wye Valley Canoes reception and bunkhouse .

A cup of tea and cake  was followed by the election of Branch officers, the adoption of the Branch Accounts and any urgent business. Our long serving Treasurer, John French, has decided to retire. John has supported CPRW for many years especially through the amalgamation of the Brecknock and Radnor Branches and we wish him the very best in his retirement.

Want to keep in touch with our news?

If you have ideas, information, expertise and can help the committee with our work, we would really like to hear from you. And if you are a Welsh speaker and have time to help us with translations for the website please do get in touch.