LINK TO CPRW RESPONSE TO THE DRAFT NATIONAL DEVELOPMENT FRAMEWORK

The Draft National Development Framework is the Welsh Government’s 20-year spatial plan for shaping the future growth and development of Wales.

It sets what happens to Powys for the next 20 years. We all have a one-off chance to say what we think. The consultation ends on 15th November and will compete for attention with Brexit politics so please spread the news and start thinking about your own response now.

The NDF says “Climate change and the decline in biodiversity are global challenges and the biggest issues faced by our nation”. CPRW Brecon & Radnor fully endorses this statement and agrees that renewable energy is a critical part of the national response but this must be a carefully measured response with full regard to biodiversity and the future needs of rural Wales.

The NDF contains 26 Planning Policies concerning development in Wales: 15 apply throughout Wales and 11 concern regional planning for 3 regions. We are in “Mid and West Wales Region” of Powys, Ceredigion, Pembrokeshire and Neath Port Talbot, including Swansea. The NDF presents a crude map of “priority areas” for wind and solar energy throughout Wales without explaining why or how these have been chosen.

The ARUP reports below, only published in response to public request, are essential to the NDF but the Draft NDF does not even refer to them.

If you would like paper copies of documents, please request these from Russell.dobbins@gov.wales

The general questions in the consultation response form do not capture our concerns but there are boxes where you can enter free style text. We focus on the Draft NDF renewable energy section (especially Policies 10 to 14) but we are also concerned about the other proposals and failure of the development framework to grapple with negative impact of development on biodiversity and preservation of our water, air and soil quality. We will add to our website as the consultation progresses.

STRATEGIC CENTRALISATION OF PLANNING IN WALES: lack of democracy for rural areas

This 20-year vision for Wales is a further stage in the devolved Welsh Government’s progressive centralisation of major planning decisions. The NDF, combined with Planning Policy Wales 10, will govern a proposed Strategic Development Plan for Mid and West Wales which, in turn, will govern our Local Powys Planning.   Hard won protections in our Local Development Plan will be overridden by these two upper tiers of planning law in which residents’ concerns are ever less likely to be reflected. The draft NDF represents a serious erosion of the rights of local communities to have a genuine voice in the development of their areas.

WELSH GOVERNMENT WILL MAKE ALL THE DECISIONS: no understanding of local factors

The Welsh Government has classed all renewable energy projects over 10MW as ‘Developments of National Significance’.  Power to make these decisions has been taken away from Local Planning Authorities and reserved for Welsh Ministers.  Our experience with the Hendy Wind Farm (see web page) demonstrates the Welsh Ministers’ disregard for local feeling, substantial damage to landscapes, heritage, biodiversity and tourism.

In contrast to proposals for Wales, just across the border, English neighbourhood planning allows communities to have real influence on the development of their local area. Renewable energy planning applications up to 50MW are decided at local authority level. National Policy provides a general framework but decisions are made locally.

HISTORY OF THE POWYS LDP: work on wind and solar local search areas has been overturned

During the examination of the Powys LDP, adopted in April 2018, substantial Proposed Local Search Areas for wind energy were abandoned because the Welsh Government’s chosen consultant, AECOM, finally admitted that, after they had followed Welsh Government guidance and applied the appropriate exclusion criteria, outside the Brecon Beacon National Park and existing Strategic Search Areas for wind farms, there were no suitable areas left in Powys for new search areas for large scale wind.

The LDP was tested for compliance with Welsh, UK and international legislation through the Welsh Planning Inspector’s Examination process. Throughout this, the Welsh Government representative was closely involved in the formulation of renewable energy policy to ensure that the Powys LDP met all relevant Welsh Government requirements.

In the final stages of development of the Powys LDP, AECOM proposed 33 solar Local Search Areas by a process of applying technology specific criteria together with constraints intended to guard against the most harmful local impacts. Following a study of the landscape impacts, commissioned from landscape consultants Enplan, 13 were removed, leaving 20. These remaining areas were then included within the LDP, allocated a potential energy capacity and then given priority rankings for build out. This process contrasts starkly with the ARUP methodology supporting the NDF Priority Area plan.  Planning Policy Wales 10 still recommends use of the AECOM toolkit for identifying areas for renewable development, but instead the Welsh Government ignored its own guidance and commissioned the ARUP reports.

Given the conclusions reached in the course of LDP development in Powys, how do Welsh Government now justify disregarding their own guidance to arrive at such different conclusions about Powys’s capacity to absorb so much more large scale wind and solar development?

More information: see our page on the Powys LDP

NEW PERMISSIVE PLANNING POLICIES FOR WIND AND SOLAR: negative impacts will be brushed aside

NDF Policy 10, applying to applications within Priority Areas, says: ‘The Welsh Government supports large scale on-shore wind and solar energy development in the identified Priority Areas for Solar and Wind Energy. There is a presumption in favour of development for these schemes and an associated acceptance of landscape change’.  The NDF does not say whether the new Priority Areas replace or coexist with the Strategic Search Areas set out in Technical Advice Note 8 (TAN8) and the 20 Local Development Policy Solar Search Areas.

The primacy of NDF Priority Areas in the planning system carries the high risk that critically important issues will be ignored. These are:

No environmental, landscape, amenity, heritage, tourism or other harm is likely to weigh substantially against any wind or solar proposal. Protection of nature conservation areas and habitats will apparently be a secondary consideration relegated to Natural Resources Wales Area Statements and Local Development Plans.

The NDF has “accepted” landscape change on our behalf without presenting any evidence about the value of landscapes in and around the priority areas.  And where is any recognition of the intrinsic importance of landscape to communities and to the rural economy?  Nearly 70% of UK visitors to Wales come primarily for its landscape and support a thriving tourism economy. Welsh Government’s Wellbeing Goals clearly recognise the importance of ‘sense of place’ to health and wellbeing.

And Powys Zones of Theoretical Visibility maps can be found here.

(You may view a larger version of, or download, the following maps as PDFs by clicking on the map or right-clicking and selecting “Save target as” or equivalent.) 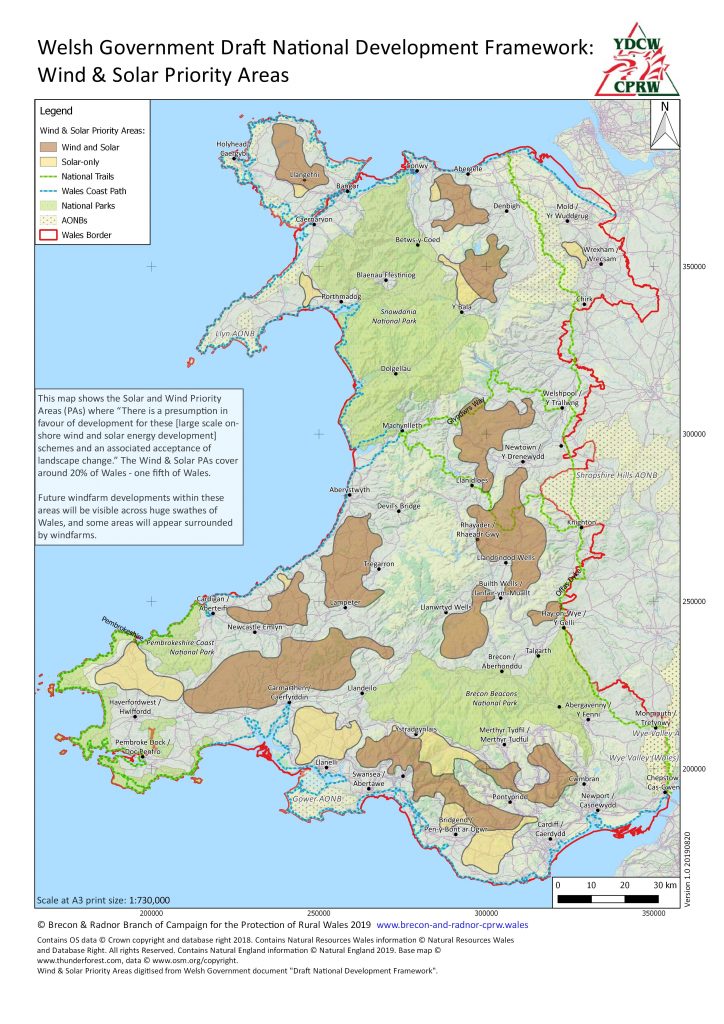 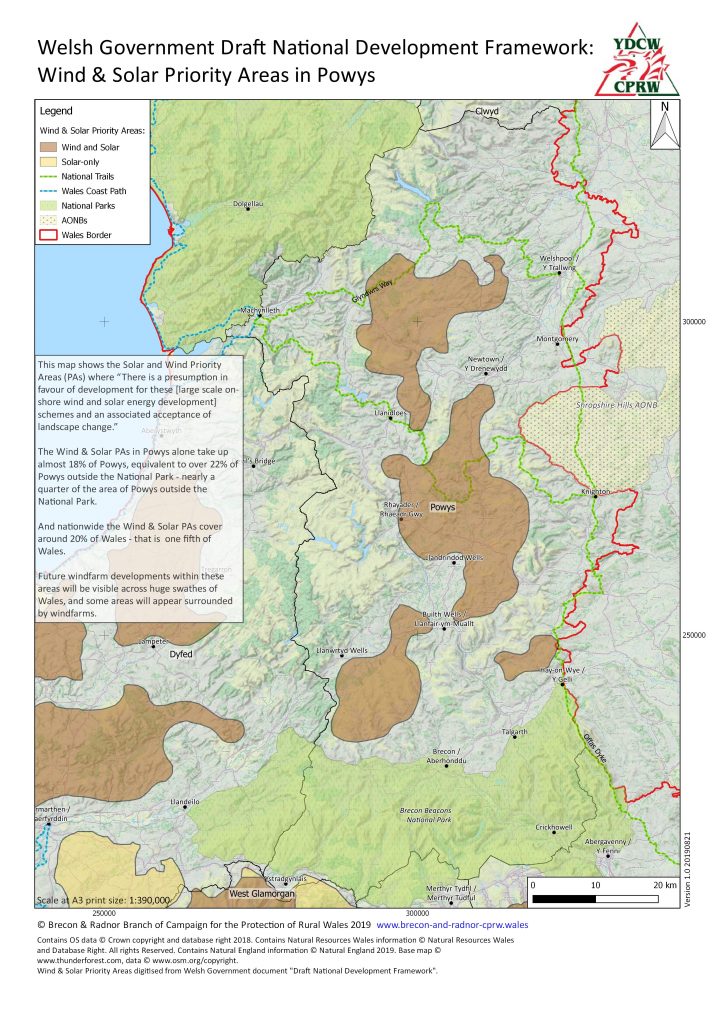 The following map shows the Zones of Theoretical Visibility (ZTVs) for wind turbines in the Wind & Solar Priority Areas and their likely visibility throughout Wales.

The shading on the maps sets out, according to the key, the areas around the country – and into England – from which wind developments within one or more proposed Priority Areas will be visible. These maps present a very conservative ‘Best Case Scenario’ based on assumptions explained on the maps themselves. In reality the eventual visual impact on the environment will likely be much much greater than that indicated here. 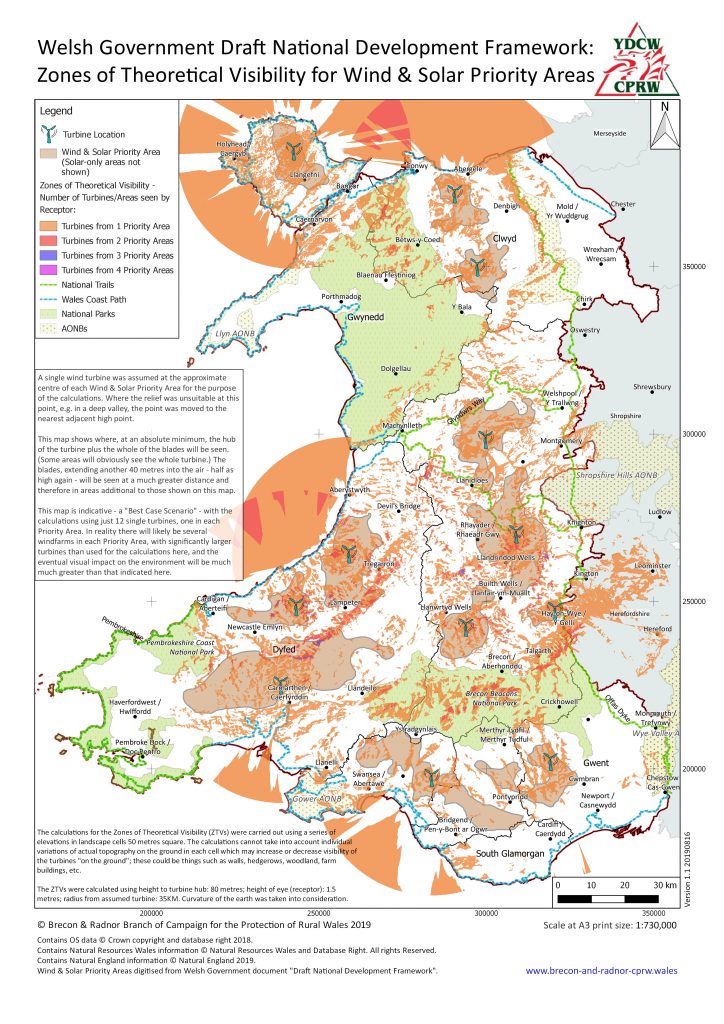 Want to keep in touch with our news?

If you have ideas, information, expertise and can help the committee with our work, we would really like to hear from you. And if you are a Welsh speaker and have time to help us with translations for the website please do get in touch.

This website uses cookies to improve your experience while you navigate through the website. Out of these, the cookies that are categorized as necessary are stored on your browser as they are essential for the working of basic functionalities of the website. We also use third-party cookies that help us analyze and understand how you use this website. These cookies will be stored in your browser only with your consent. You also have the option to opt-out of these cookies. But opting out of some of these cookies may affect your browsing experience.
Necessary Always Enabled
Necessary cookies are absolutely essential for the website to function properly. This category only includes cookies that ensures basic functionalities and security features of the website. These cookies do not store any personal information.
Non-necessary
Any cookies that may not be particularly necessary for the website to function and is used specifically to collect user personal data via analytics, ads, other embedded contents are termed as non-necessary cookies. It is mandatory to procure user consent prior to running these cookies on your website.
SAVE & ACCEPT